Churches generally have no budget for technology and frankly, I don’t think that a church should really avoid spending on technology as much as possible. I’m sure this isn’t a view many people share but it is my view. I believe it using whatever is available whenever possible and only making upgrades or purchasing new hardware when it is absolutely necessary.

There are several pieces of equipment in varying states of age and functionality. I haven’t sorted out everything, yet, and it is also not completely on my shoulders, as another tech and audio enthusiast in the church, Phil, has taken care of the audio equipment. It is all a work in progress.

My focus, for now, is to restore multimedia capabilities of the computer, Dell Inspiron 3646 and even improve it somewhat. Upon my initial assessment, I knew what my first steps were.

The machine originally came equipped with Windows 10 which would annoyingly upgrade at the the most inopportune time and using it on under powered hardware is often problematic. The few times I spent any amount of time on the machine, it didn’t perform very well but it was working and I wasn’t really interested in thrusting the greatness of Linux on those not ready for it.

Like it or not, sometimes your volunteers have things come up and just don’t make it in one day leaving the available workers short handed. Back in my days of childhood, multimedia meant slide show or overhead projector, but it’s hard to convinced a 20 something pastor that the right investment with no budget is a slide projector…

A budget of zero, or rather, whatever I am willing to dig up to make improvements. Since I had already been informed there is no budget for any upgrades or equipment, I was only going to do what was necessary to make the computer system as functional as possible. I already knew, with the power and capabilities of Linux, I could make substantial improvements very easily.

Here is the hardware I have to work with:

I prepared a USB drive with openSUSE Leap 15.0. I downloaded the ISO from here and put the image on an ISO using SUSE Studio Imagewriter. Once the image completed writing, I inserted the drive into the Dell Inspiron 3646 and powered it up.

In order to access the BIOS, when the machine is going through the POST process and you are greeted with the Dell Logo, press F2. Since openSUSE is capable of handling secure boot without issue, I didn’t have to change anything. I just wanted to be sure that the BIOS was picking up the USB drive and I wanted to see the main screen so I could record the main bits of the hardware.

I set this machine up with KDE Plasma because, is there really another choice? I mean, yes, of course there is but I didn’t want to have to fiddle with anything to get the features I wanted so my only real choice was of course going to be Plasma.

Since I like what I like when setting up the partitions, I did it manually to my preferences. I prefer the swap partition over the swap file and I am using BTRFS on root with snapshots enabled. BTRFS has been a rock solid performer in this capacity. I use XFS on /home. I was going to use Ext4 but the only reason for that would be for Dropbox compatibility and frankly, I just stopped using Dropbox due to their technical shortcomings. 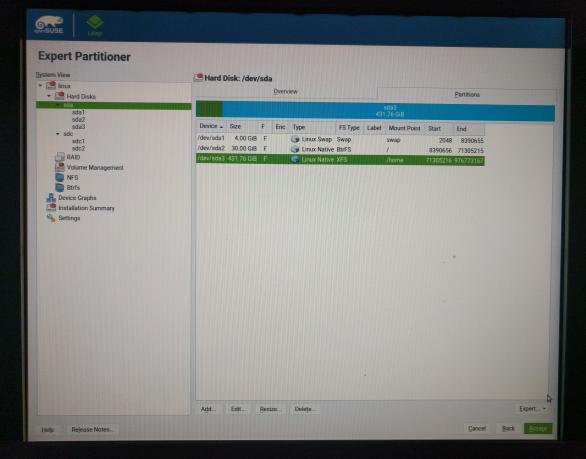 After boot up, the system was all set. It required a few more software packages, firstly, the Plasma Browser Integration. In terminal:

It actually may not be necessary to have to explicitly install this software package as the desktop it is supposed to automatically ask you if you want it installed.

Next I installed the Plasma Add-on for Firefox.

Finally, I installed all the Codecs and VLC into this machine using my multimedia codecs and VLC player instructions for Leap 15.0.

The last bit to configure was KDE Connect. Initially just with my Android phone, mostly for demonstration purposes. I also was presented with an opportunity to do a “live test” as well.

After some tests, it all worked just as expected and the machine performed much better than it did previously… exceptionally better… Not to belabor the point but before the machine was rather sluggish and I didn’t expect anything fantastic but this machine really does perform fantastically well.

This machine has only one VGA output and it was previously set up with a splitter cable that when plugged into both the monitor and the projector, the output would shut down. I don’t know if that is how it has been used or not but I determined it needed a proper splitter. I picked one up, hooked it up and I now have a unified output between the screen and projector.

I actually thought that this machine was going to require more memory to function well enough but it isn’t necessary at this time. This machine isn’t being taxed at all. KDE Plasma, even with all the fun I was running did not tax the machine at all.

I am sure that there are a few more “bugs” to be worked out, mostly with the human to machine interaction. Mostly, I need to properly document the process of turning it on and off the system properly as well as how to pair Android phones or tablets to allow other workers to use the KDE Connect features. I have helped two people completely unfamiliar with KDE Connect, use it and it be impressed with it.

The feature that stood out the most was the ability to share a YouTube URL from the phone directly to the computer to have it open immediately and play. A feature I have enjoy for quite some time and have become quite accustomed was new and exciting to the unfamiliar. The multimedia controls, also quite handy and when I demonstrated the ability to use the phone to switch slides on LibreOffice Impress using only the volume keys, all well received

I still need to create some documentation to allow anyone to be able to use it without my direct intervention. For now, I am going to make myself available to help people become accustomed to this “new” system.

Since some of the volunteers do Add a dedicated “burner” tablet so that volunteers don’t need to install KDE Connect on their phones. After I was reviewing some of my photographs, I noticed that there is an HDMI port on this computer. I am going to see about adapting that port to VGA and for multi head capability. The next upgrade would be a memory upgrade. 4 GiB of RAM, although good enough for now it would be nice to to have just a bit more. I haven’t opened the machine up but I am guessing there are at least 2 slots and one of them filled and the other is open. Of course, I need to check for certain before I start buying hardware.

Not directly related to this computer, there is a need to make further refinements to the attached sound system and determine what the issue is with the lighting control system. 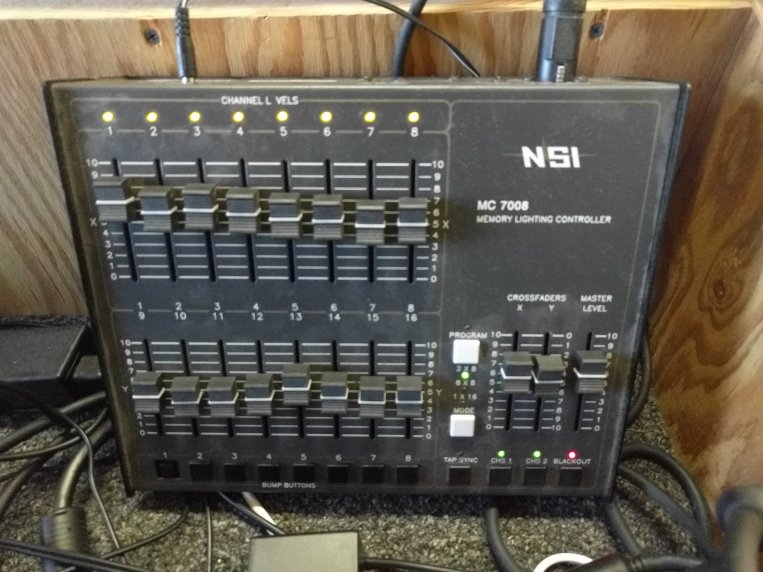 The Dell Inspiron 3646 is a fine machine that, in my estimation has many years of service ahead of it. I have to say, once again, how amazing it is how much more efficient Linux is than Windows on less capable machine. The  computer’s functionality would greatly improved with a second display.

The sound system to which it is connected and the lighting controller are going to need a bit more attention. I am not sure exactly where to start or if I should even be the one to touch it. There is an annoying 60 Hz hum that needs to be eliminated. Then there is the matter with the lighting controller. Currently, it does nothing, no lights work. I am not sure yet where the breakdown is but I will figure it out eventually.

This is only the first in many steps to slowly making the information system situation in the church better. This is not the “main effort” in the church which is perfect for me. No budget, no attention and no one else that interest in finding solutions.