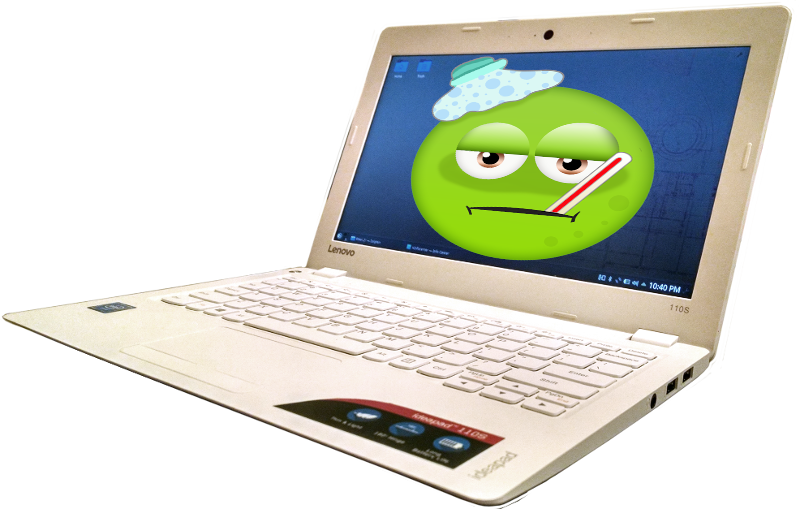 For several months, I was happily using my Lenovo ideapad 110S running openSUSE Tumbleweed. I have had few complaints about the device, other than a lack of RAM (but I knew that going into the purchase). One day the thing just stopped working; on boot up it left me a sad looking, blank screen. No combination of key presses did anything to change its state. All I could do was hold the power button down and forced off the laptop. No matter how many times I power cycled the machine, it was the same thing, no splash or error message, not a single bit of useful information. It was a busy time for me so I just put it away in a drawer thinking I’ll get back to it and maybe dissect it for it “secrets” or something… but I really just forgot about it.

I was listening to some discussion about BIOS issues and how it is possible for it to become corrupt and require some sort of reset. My mind wondered from the conversation to that misbehaving Lenovo ideapad and I thought that maybe I was having some sort of BIOS or UEFI issue. I am not sure why I didn’t think of it sooner but I thought, is it posssible that the UEFI boot partition may have possibly been corrupted?

Using my previous blathering about installing Linux on this machine, I tried to hit F2 rapidly on startup to find that it initially didn’t get me into the BIOS. I tried it a few times, all with no success. Then I remembered that this has one of those silly keyboards that defaults to having the media keys as primary. I tried it again, this time, holding the Fn key down plus F2. The trick is, just keep tapping immediately as you turn the computer on. Once it displays a black screen it is too late.

When I was able to get into the BIOS. I reordered the boot sequence to look for my USB drive but that didn’t work. It still booted into the back screen. Going into the BIOS for the second time, I switched the Boot Mode to Legacy Support. It is still set to look for UEFI first but when that fails, look for a Legacy Bootable device. This change allowed me to boot from the USB Drive. 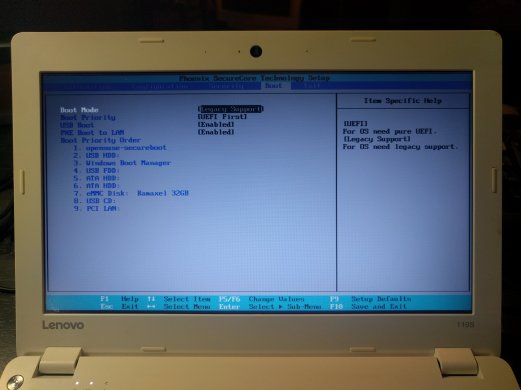 Using the latest openSUSE Tumbleweed snapshot, I performed the install, formatting UEFI ( /boot/efi ) and root ( / ) partitions. I figured, leave nothing to chance and just wipe the machine. The installation was uneventful and didn’t require any further intervention.

Now that I have the system back up and running, I can use it as my “g o machine” once again. The 2 GB of RAM makes things a bit tight but maybe it is good for me to only have 5 or 6 tabs open at a time but as many terminal applications as I want.. It is unfortunate that I wasn’t smart enough to try this sooner as it would have been a better machine to take with me through the summer. The nice thing is, my drawer of electronic bits and bobs is slightly lighter. Thankfully, there is no need to make any effort to fill it with more junk as it seems to do that on its own.

I learned that just because a screen goes black on a computer and it becomes entirely unresponsive, doesn’t mean it is garbage. I wish I had thought of doing this to recover this laptop sooner, I would have been regularly using this machine. Not sure if this is a common problem or not but maybe, just maybe, this might somehow wind up helping someone else out with a similar issue.